E3 is only a few days away. Here are my predictions for Halo at E3 2014: Halo 5 Guardians teaser, Halo TV series update, and the announcement of Halo 2 Anniversary or Halo: The Master Chief Collection. Share your thoughts!

Be sure to Subscribe and follow me on Twitter (@ChiefCanuck) so you don’t miss any Halo 5 news or Halo News from this years Xbox E3 conference.

With “Judges Week” for E3 going on leaks and rumors are beginning to spill! The following image has surfaced on social media which lists a Halo 5 tech demo and no mention of the repeatedly rumored Halo 2 Anniversary. Keep in mind this hasn’t been confirmed. 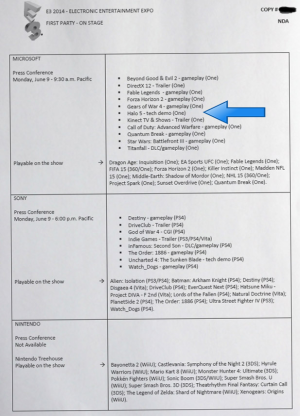 For those who don’t know what Judges week is it’s when a elite group of individuals get earlier access to interviews and demos hosted by game publishers at E3 weeks ahead of the conference.

A recent tweet from Microsoft’s Phil Spencer has revealed that 343 will unveil Halo news at this years E3 and apparently not during Microsoft’s Spring showcase.

“Halo news will be coming at E3. 343i has a great plan in place, will be cool to share with everyone.”

@MarvelousJoJo Halo news will be coming at E3. 343i has a great plan in place, will be cool to share with everyone.

In 2012 we got some of our first looks of Halo 4 at the spring showcase prior to E3 2012 -and many people have expected the same events to occur for the upcoming Halo title for Xbox One but it appears this may not be the case.

Many people are speculating that we might see a Halo 2 Anniversary announcement at E3 since Halo 2 was released 10 years ago and 343/Microsoft personnel has seemingly been hinting at all things related to Halo 2. Others still think we’ll be getting an announcement for the continuation of Master Chief in Halo 5. Perhaps we’ll have both announcements, because in the end we don’t know what “Halo on Xbox One” really is.