Also spotted in the footage is a Neon weapon skin set, Emile’s flame armor variant, and a striped version of Jorge’s body armor.

The next update for Halo 5: Guardians, Memories of Reach, will be available tomorrow – May 12th, 2016. The update adds Infection game type, Noble Team armor sets, Brute Plasma Rifle, Jorge’s Chaingun, and the Phaeton Helios to Halo 5.

Memories of Reach is the second to last free content update detailed for Halo 5: Guardians. The next and presumably final content update is Hog Wild. Hog Wild is assumed to release in June. Warzone Firefight’s release date is TBA.

Memories of Reach will be adding the remaining armor from members of Noble Team, the cast of Halo: Reach, to Halo 5: Guardians. In the teaser we see Jun, Kat, Jorge, and Emile. Carter’s armor is already in the game and Noble 6’s armor kind of exists… as a homage currently.

This update was expected to release at the end of April, however Ghosts of Meridian was delayed missing the end of March and was released April 5th. Now fans are left to wonder if Memories of Reach is still on course for the end of April or not.

Ghosts of Meridian is the next free content update for Halo 5: Guardians and is scheduled to release next week April 4th-8th. In addition to adding maps, vehicles, weapons, skins, armor sets, emblems, and more. Ghosts of Meridian will include a variety of game improvements based on our feedback. Including multiplayer updates and fixes, sandbox, weapon, and vehicle adjustments. Improvements to the REQ station UI performance, they’re also adding a lengthy list of forge additions, fixes, and improvements. SWAT DMRs will be added along with a re-balance of swat game types.

Tyrant was revealed to be the new Arena map coming with the update. Tyrant is a small symmetrical map made for CTF and assault.

Skirmish at Darkstar is the Warzone map with this update. It’s the most condensed and infantry focused map, features a new intro sequence, new legendary bosses (some driving UNSC vehicles), and interactive gates near the home bases.

The Gravity Hammer variants and traits were also revealed, Corpse Maker, Grinder, and Tartarus’ Gavel. Corpse Maker generates an unstable gravimetric vortex at the point of impact – so from that sounds of that I think it might generate the gravity well like the Voids Tear. The Grinder has a faster swing time and additional energy capacity – so more ammo.

Also a look at Warzone Turbo which is only available until April 4th!

To cap off the Halo World Championship Finals 2016 in Hollywood, California – 343 Industries revealed the gameplay trailer for the upcoming Warzone Firefight mode for Halo 5: Guardians.

Warzone Firefight is set to come out Summer 2016, will support up to 8 players (that’s 4 more than the previous iterations of Firefight in Halo 3: ODST and Halo: Reach), as well as “dynamic objectives” which 343 boasts “that you can play thousands of matches before seeing the same objective combination”, and a new tier of enemy – Mythic.

Players will face numerous enemies and objectives as they try to finish the mode’s 5 rounds. Of course Halo 5’s REQ system will be accessible and as a  result, it’s safe to say that this mode will also require online access due to the REQ system. Not to mention due to the lack of split-screen in Halo 5 – you’ll want all the help you can get! 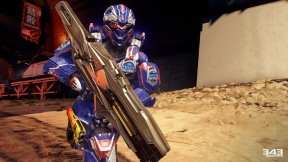 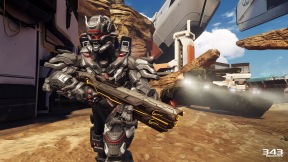 Halo 5 Guardians Warzone Firefight One on One 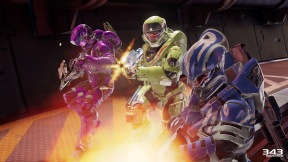 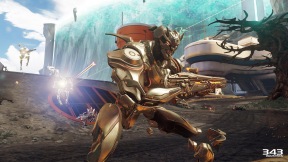 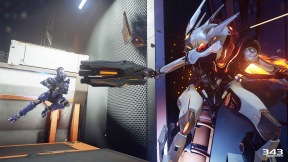 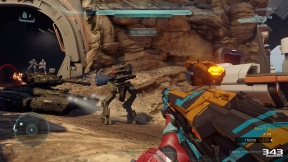 First Official Screenshot for Halo 5’s Warzone Firefight was released and the Ghosts of Meridian update will arrive in early April, just missing the month of March by a few days. 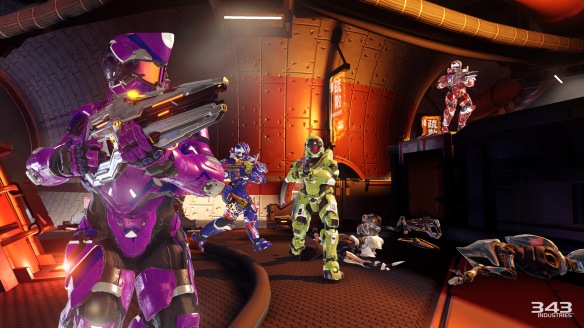 343 Industries recently announced the titles for 3 upcoming free DLC updates and the return of Firefight to Halo 5: Guardians!

A look at all the new content introduced to Halo 5: Guardians with the release of the Hammer Storm Update!