Experience the debut trailer for Halo: The Fall of Reach – The Animated Series. This three-act series tells the oft-shrouded origin stories of the SPARTAN-II program. Set during events both before and after the terrifying Covenant attack on humanity, the story will introduce viewers to the members of Blue Team and allow them to witness the pivotal moments that forged the legendary squad’s legacy.

Halo: The Fall of Reach Animated Series is included with purchase of the Halo: 5 Guardians Limited and Limited Collector’s Edition. Individual purchase of the series will be available a week after Halo 5 launches.

Halo: The Fall of Reach Animated series (include in LCE and LE of Halo 5) feels in the style of H2A terminals #SDCC https://t.co/aWfeE2AMHE

Halo: The Fall of Reach Animated series will be available for individual purchase, if you don't get LE or LCE of H5 https://t.co/qz2XY1FISl

Today is the first day of SDCC and with it a new Warzone map was revealed by 343 Industries and Mega Bloks. Yup that’s right, Mega Bloks. The map is called “Raid on Apex 7” and it’s the biggest Warzone map revealed so far… which is interesting… since we’ve only seen one before. Regardless, judging from the size and scale of the mega bloks set, it does look massive. 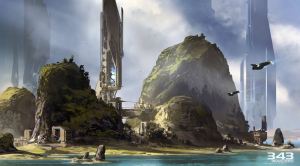 They spent 16 weeks building the map; it’s made up of roughly more than 89,000 blocks and weighs half a ton.

The map, Raid on Apex 7, is a based off the Halo: Combat Evolve campaign mission “The Silent Cartographer”. This is the second of the six Warzone maps that will be available at launch; the map revealed at E3 was called Escape from ARC. There will be an additional six Warzone maps released for free between launch and June 2016. Here’s the official description for the map.

“Clearing out the initial Covenant threats and controlling the Forerunner Spire in the center of the island is paramount to a team’s success and provides a central base of operations. If your team loses the Spire, don’t despair; players can use a system of caves or take to the beach to flank the base. Beware of the Covenant though, for they will not let you take this island so easily. They will counterattack and fight to retake their territory. Continue the push for control of the island and take out the opposition’s core… before you awaken something much worse.”

Check out the Mega bloks set over on Gamespot