Daybreak is an asymmetrical cluster of research facilities residing in the scenic highlands of the planet Oban. Built with Capture the Flag in mind, this map features a central top middle control area as well as outer roadways that circle the bases that lie within. Suggested game modes on this map include Capture the Flag, King of the Hill and Team Slayer, but the map will support many more Halo 4 game modes.

When playing, you’ll notice that it is a challenge to navigate the map with the Banshee, and that only skilled pilots will be able to eliminate the infantry fighting within Daybreak’s winding channels. If you know the enemy is in the Banshee, be ready for the opportunity to get a Skyjack medal or two – pilots are often forced low to the ground.

Operation: DAYBREAK is a cluster of research facilities residing in the scenic highlands on the planet Oban. The map itself is comprised of two such UNSC facilities opposing each other in this large asymmetrical map. Strategy here is key; teams must split focus between attacking the enemy base while playing close defense to their own. Claim your team’s sniper rifle to cover the central Man Cannon, or grab a Warthog to push through the side channels and flank the other team’s base. The Rocket Launcher and Banshee both spawn in strategic positions as well. On Daybreak, claiming early power is essential to landing the first flag or taking an early lead. 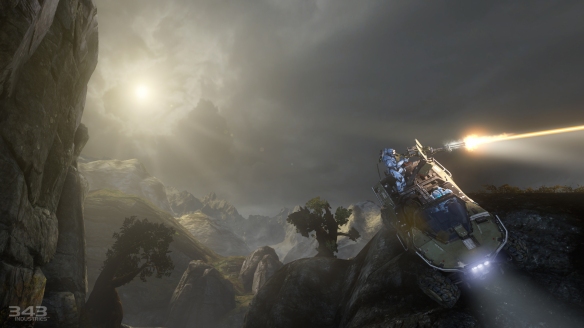 IGN is back here once again with their third and final installment of their 3 walkthroughs for the upcoming Halo 4 Castle Map Pack. Here we have a look at the map Daybreak. Links to the other two map walkthroughs, Perdition and Outcast will be linked below the video