The website, huntthetruth.tumblr.com takes you to a mysterious tumblr page featuring the Halo 5: Guardians logo, the hashtag #HUNTtheTruth(Hunt The Truth), and a bullet with the word “Traitor” inscribed.

What do you think will be revealed? Perhaps a trailer for Halo 5: Guardians? Only time will tell. 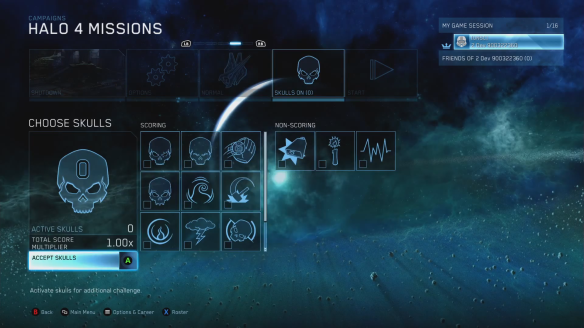 Skulls are switches that can be activated to tweak campaign gameplay. They are available in every Halo campaign, and Halo 4’s Spartan Ops.

The following Skulls are available in Halo: Combat Evolved campaign:

In addition to the Skulls still hidden in the game, we’ve added a huge variety of additional modifiers you can use. Here’s the full list:

You do not need to find the hidden Halo 3 Skulls to unlock them in The Master Chief Collection.

You can turn on any of the following Skulls in Halo 4’s campaign and Spartan Ops:

How to unlock the Determined Stance, Striped DMR Weapon Skin, 50,000 XP, Vision and Rush armor skins for Halo 4 with Spartan Assault for the Xbox One/360

All you need to do is play and complete ONE mission of Halo Spartan Assault on either Xbox One or Xbox 360 – that’s it!… and enter the code that you see down below.

END_OF_DOCUMENT_TOKEN_TO_BE_REPLACED

The 343rd day of the yea (December 9th) is fast approaching. So 343 Industries is putting on an event to celebrate!

343 Industries is putting on a livestream from 1:00 – 4:00pm PST at http://www.twitch.tv/343industries. Here there will discuss Halo Spartan Assault on Xbox 360 and Xbox One (Which is scheduled for release sometime this December); as well as other Xbox One discussions and of course gameplay and giveaways.

Also if you play Halo 4’s online multiplayer, either War Games or Spartan Ops, on Dcember 9th you’ll receive the Commando helmet as a gift. This is a one-day-only giveaway. Normally the Command armor set is unlock via completion of the Dominion Victory Commendation. This unlock will be treated similarly to the Guilty Spark Emblem they had back in November for Halo 4’s 1st Birthday.

FYI: If you completed a game in #Halo4 matchmaking on 343 Day, your Commando helmet has been unlocked! #enjoy

Also on December 9th the Resistor Tactical Package will be released for free to the public. It was previously reserved as a timed exclusive Champions Bundle bonus item. The Resistor Armor mod allows players to retain full mobility when taking fire for a few moments. I personally really enjoy this tactical package and use it in my objective/rushing loadouts. 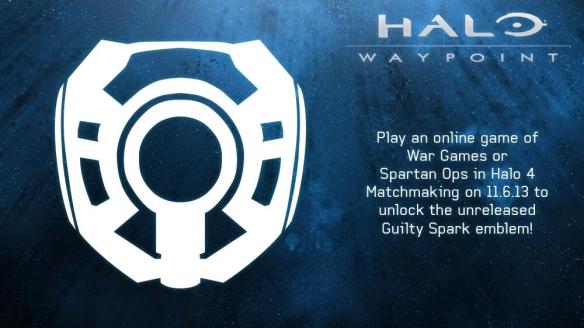 Halo 4’s first birthday is around the corner! If you’re playing Spartan Ops or War Games Online on November 6th 2013 you will unlock the unreleased Guilty Spark emblem!

*UPDATE! 343 Industries has said that the Guilty Spark Emblem will be released to those who did play online November 6th 2013 in a few weeks. No set date.

Next week is Halo 4’s first birthday! Over the course of the past 12 months, millions of players have played Halo 4. Whether you spent your time in Matchmaking, Forge, Theater, Campaign, Spartan Ops, or elsewhere, we’d like to say thank you for playing our game. In fact, along with thanking you, we’d also like to give you a teeny-tiny-in-game-gift. All players who complete a game in War Games or Spartan Ops matchmaking on November 6th, 2013 will earn the Guilty Spark emblem.

This emblem has not yet been released in Halo 4, and we hope that you hop online with some friends to celebrate the birthday of our first game and also snag a rare emblem. After, you can rock the emblem proudly and brag to your friends about how you attended the birthday party, and they did not. We’ve got also got some Matchmaking fun in the form of a 24-hour playlist planned for this special day, so keep an eye on Halo Waypoint for all the details.

The Halo 4 Game of the Year Edition will be coming in October. It’s rumored to be priced at $49.99.

The Halo 4 Game of the Year Edition will include:

Earlier today IGN came across a photo revealing details about a Halo 4 Game of the Year Edition that will be coming out later this October. It will include all of the downloadable content from the release day of Halo 4 (so far) for $49.99.

“A Game of the Year Edition of Halo 4 will be offered this October, offering tremendous value for fans who want to enjoy one of the most critically acclaimed games of 2012, and additional DLC all in one place. We will have more details to share during the live stream of the Halo Global Championship Finals this Sunday.”

The Halo 4 Game of the Year Edition will include:

An overview of the bonus content you get if you’ve purchased the Halo 4 Champions Bundle and Halo: Spartan Assault. You get Striped DMR Weapon Skin, Determined Stance, Vision and Rush armor skins.