Halo: Spartan Assault is coming to Steam April 4th for $4.99 – this brings the excitement of Halo combat to Steam for the very first time! Spartan Assault will run on the following operating systems:

To accommodate for the cheap price on Steam, Microsoft dropped the price of Halo: Spartan Assault on the Windows 8 Store to the same price – $4.99.  END_OF_DOCUMENT_TOKEN_TO_BE_REPLACED

How to unlock the Determined Stance, Striped DMR Weapon Skin, 50,000 XP, Vision and Rush armor skins for Halo 4 with Spartan Assault for the Xbox One/360

All you need to do is play and complete ONE mission of Halo Spartan Assault on either Xbox One or Xbox 360 – that’s it!… and enter the code that you see down below.

END_OF_DOCUMENT_TOKEN_TO_BE_REPLACED

After leak that surfaced not that long ago, HaloWaypoint finally confirmed that Halo Spartan Assault will release tomorrow (January 31st, 2014) for the Xbox 460.

Players that have purchased Halo: Spartan Assault for Windows 8 or Windows Phone 8 prior to Dec. 15, 2013 may be eligible to purchase the Xbox 360 version of the game at the discounted price of $4.99. Click here for step-by-step redemption instructions.

With no announcement, according to Xbox.com it lists Halo: Spartan Assault for the Xbox 360 with a release date of January 31st, 2014, as seen below.

Keep in mind, the 360 version is still called an arcade title whereas on Xbox One all games are treated “equally” and are not limited to the 400 gamer score cap. Click here to see the Achievement list comparison between Xbox One and Xbox 360

Halo Spartan Assault is a top-down twin stick shooter that first launched for Windows 8 platforms and was eventually ported over to Xbox One and Xbox 360 platforms. The game takes place between the events of Halo 3 and Halo 4 following the stories of Spartan Davis and Commander Sarah Palmer during the start of the Spartan Ops program.

WHAT YOU’LL FIND ONLY ON XBOX ONE AND XBOX 360

Thanks to MixMaker117 for showing us a handy guide to earn 1,000 XP for Halo Spartan Assault in a minute. Just by applying 2 skulls (Hollow and Pacifist) in mission A1, which is by far the easiest and fastest mission to complete, and you’ll be farming XP in no time. XP is used for purchasing alternative armor abilities and boosters prior to playing missions. Those alternative choices can prove to be extremely helpful in later missions to earn gold stars.

Surprise surprise! Halo: Spartan Assault has released one day early for Xbox One. It costs $14.99, or $4.99 if you purchased the Windows 8 version prior to December 15th. The Xbox 360 version is scheduled for sometime January 2014. The download size is 2.53GB.

Halo: Spartan Assault is a fast paced top-down shooter set during the timeline between “Halo 3” and “Halo 4,” progress your Spartan career as you engage in over 30 exciting Campaign missions using many of favorite Halo weapons, vehicles and armor abilities. Team-up on Xbox Live and fight with a friend against waves of the nightmarish Flood in the all-new online co-op multiplayer mode.

For those that have purchased Halo: Spartan Assault for Windows 8 or Windows Phone 8 prior to December 15, 2013, will be eligible to purchase the Xbox One version of the game at the discounted price of $4.99.

Halo: Spartan Assault for Xbox 360 will be available in January 2014. 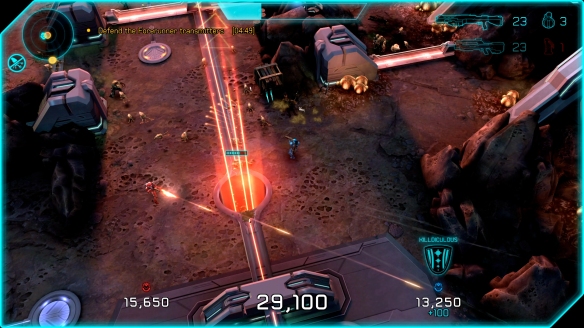 What you’ll find exclusive on Xbox One and Xbox 360:

The 343rd day of the yea (December 9th) is fast approaching. So 343 Industries is putting on an event to celebrate!

343 Industries is putting on a livestream from 1:00 – 4:00pm PST at http://www.twitch.tv/343industries. Here there will discuss Halo Spartan Assault on Xbox 360 and Xbox One (Which is scheduled for release sometime this December); as well as other Xbox One discussions and of course gameplay and giveaways.

Also if you play Halo 4’s online multiplayer, either War Games or Spartan Ops, on Dcember 9th you’ll receive the Commando helmet as a gift. This is a one-day-only giveaway. Normally the Command armor set is unlock via completion of the Dominion Victory Commendation. This unlock will be treated similarly to the Guilty Spark Emblem they had back in November for Halo 4’s 1st Birthday.

FYI: If you completed a game in #Halo4 matchmaking on 343 Day, your Commando helmet has been unlocked! #enjoy

Also on December 9th the Resistor Tactical Package will be released for free to the public. It was previously reserved as a timed exclusive Champions Bundle bonus item. The Resistor Armor mod allows players to retain full mobility when taking fire for a few moments. I personally really enjoy this tactical package and use it in my objective/rushing loadouts.

END_OF_DOCUMENT_TOKEN_TO_BE_REPLACED

Enlist as a Spartan soldier and sharpen your tactical skills in battle! Set between the events of Halo 3 and Halo 4, Halo: Spartan Assault, developed by 343 Industries in conjunction with Vanguard Games, is a new chapter within the award-winning Halo universe. Spanning over 30 missions in vibrant, dangerous worlds, dive deeper into the back story of Human-Covenant wars and the origins of the Spartan Ops program.

WHAT YOU’LL FIND ONLY ON XBOX ONE AND XBOX 360

Play longer than ever in a new online Co-op mode, and watch each other’s backs with all-new Co-op missions*

Engage in Operation Hydra, the expansion from the Windows 8 and Windows Phone 8 game that brings mystery and a chilling addition to the single player Campaign

Wage war against a persistent and overwhelming enemy — encounter the Flood for the first time in Halo: Spartan Assault